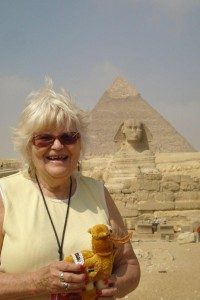 Ariadne’s Notes: On August 1st, the World Poetry Cafe radio show,  CFRO 100.5 FM, welcomed the exceptional Ruth Kozak to the show at 1 pm PST! We were lucky  to have her on the show since she is leaving at the end of the month for Greece , Wales and time permitting, Crete.  Ruth read several poems and part of of her beautiful volumes on Alexander the Great, the Shadow of the Lion. When she was on our last show, she described an (imagined) encounter with Alexander the Great which seemed magical and real to me. I hope she sees him again on the trip. The show also featured e-poet ,Paramananda Mahanta from India and Egyptian filmmaker Tarek Mounib, Free Trip to Egypt. Also a new story by Sharon Rowe for her second book!

On behalf of the World Poetry Team, celebrating our 21st year on the air, we wish Ruth a wonderful trip filled with knowledge and joy. 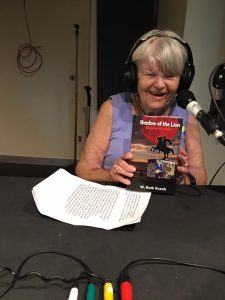 Ruth Kozak researched her historical novel SHADOW OF THE LION while living in Greece. Published in UK by www.mediaaria-cdm.com, in two volumes: BLOOD ON THE MOON (2014) and THE FIELDS OF HADES (2016) the story follows the events after the death of Alexander the Great. The full novel, SHADOW OF THE LION is also now available on Amazon Kindle. Ruth is a travel journalist and her aKindle e-book ATHENS AND BEYOND was published by Hunter Publishing U.S.  Ruth instructs writing workshops in New Westminster and Vancouver. She is a member and president of the BC Travel Writers Association, member of Royal City Literary Arts and hosts the bi-monthly series “In Their Words”.