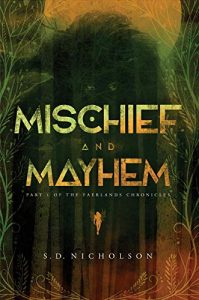 The World Poetry Cafe Radio Show, 100.5 FM, August 15, at 1:30 pm PST welcomes S.D. Nicholson with his new book : Mischief and Mayhem: Part One of The Faerlands Chronicles [May 24, 2019, Kohler Books, by author S. D. Nicholson, is a dark fantasy for adults that will sweep them away to a more magical land.

S.D. spoke about the importance of writers trusting their instinct and following it instead of discounting it. He chose to create a series for adults to help them escape from everyday reality and perhaps to give them hope. It was a fascinating interview and we heard from a number of listeners that were interested. 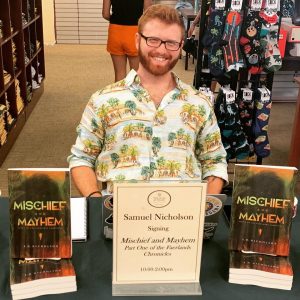 Mischief and Mayhem follows protagonist Ophelia Maplewood on a twisted journey through the realm of the Faers. After lying dormant for centuries, a dark presence awakens. While malicious forces quietly stir in the southern nation of the Meadows, Ophelia, along with her companions from the Woodland Scouts, set out into the darkness. Soon, they find new strength and allies in the north – along with an unexpected human. Joining Ophelia and her Scouts may be his only means to salvation, as he quickly discovers what little understanding of the hidden worlds surrounding his own he really has. Will their journey bring balance to the homeland and prevent chaos from spreading to the other realms? Only time will tell.
In an interview, Nicholson spoke on :
-His inspiration behind writing Mischief and Mayhem
-His writing process
-What is next in terms of the series?
-Why he decided to not write the popular genre fantasy YA, and aim at adults instead.
-The process of creating a whole new “world” – tips for other fantasy writers.
know! More at www.sdnicholson.com and on Facebook and Instagram. Buy the first of the series at:

Source: Our greatest thanks to Katie Schnack for her wonderful work! katie.schnack@smithpublicity.com