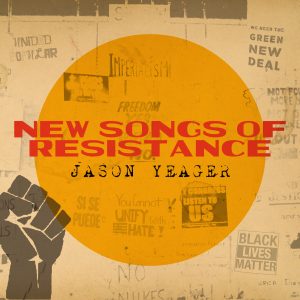 Ariadne’s Notes: The World Poetry Cafe radio show CFRO 100.5 FM on September 26 continued the Peaceathon with readings of the peace poets from around the world and other events. This year has been the best ever with so many peace events and so much wonderful work to create a wave of loving peace to circle the world and help it to balance itself.

Poets and Peace Promoters. On Thursday, September 26, at 1:10 pm PST,  the World Poetry Peaceathon continued with poems from Carolyn  Mary Kleefeld, Mahmood Jan, Lidia Chiarelli, Gloria Khe, Juanita Garcia Vera, and James Berkowitz. Also, time permitting the lovely long poem by Pj Johnson, Poet Laureate of the Yukon.  Eighty of the shorter poems were given away with permission on Sunday at two events that we participated in.

LISTEN TO THE SHOW: http://www.coopradio.org/content/world-poetry-caf%C3%A9-59

Calling in with a brand new CD also at 1:30 pm PS with his brand new CD was Jason Yeager with New Songs of Resistance, which featured reimagined folk music from Argentina, Chile, and Brazil, as well as new compositions inspired by our current reality.  It fit in and was blessed with the rest of the program so well. Also, in the midst of the poetry readings, we were honored by the wonderful musician Jason Yeager and his great new CD  New Songs of Resistance.  Jason is also giving part of the proceeds to Raices who help migrant families. Go to https://www.jasonyeager.com/ for more information and to buy a CD!

*Thanks to Braithwaite and Katz for another wonderful musician!

Ariadne’s Notes: We are so honoured to present another Important International Partner and distinguished artist and poet Lidia Chiarelli! Lidia’s peace gift poem was chosen as one of four poems and was available at the University of British Columbia (Irving K. Barber Learning Centre where several hundred gift poems were taken by the 100,000 students and public at the Fourth World Poetry Canada International Peace Festival during the month of October.  Also offering gift peace poems on display were our other community partners at the UBC Learning Exchange and the Britannia Public Library in Vancouver, BC, Canada.A total of 575 poems were printed and rolled. The poems went so quickly that many more were printed, rolled and given.

Here is the link to the exhibition that is also on line http://gianpieroactis.jimdo.com/artists-glances-only-for-your-eyes-exhibition-on-line/ or the link to youtube where is the Calendar 2015 with some of the paintings in exhibition http://youtu.be/jFRMFFAgnvA 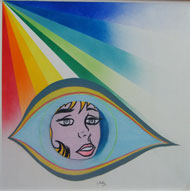 Ariadne’s Notes: I am beginning to post all the award winners that have been waiting a long time to be featured. Lidia Chiarelli  is a World Poetry Empowered Poet Award Winner whose peace poem was selected to be one of four chosen by a selection committee
575 gift poems have been printed and are ready to be given out starting October 1st. 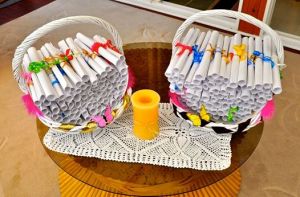 Photo by Una Bruhns, 200 gift peace poems ready to be given during the Fourth World Poetry Canada International Peace Festival, October 1-17th, after our poem rolling party at the UBC Exchange. 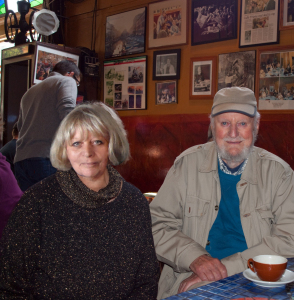 Lidia Chiarelli was born and raised in Turin, in northern Italy, where she studied and graduated in “English Language and Literature” at the University of Torino. For several years, she devoted herself to teaching English in secondary schools, and included “creative expression” courses in her teaching methods.  She organized a unique “mail art” exhibition at Giuseppe Perotti School (Torino, 1990), which turned out to be an opportunity to become acquainted with many artists, especially with Sarah Jackson, a digital artist from Halifax, Canada. Her long distance collaboration with the Canadian artist, Jackson, and with British writer Aeronwy Thomas, (the daughter of Dylan Thomas), led her to found, with four other members, the artistic literary Movement Immagine & Poesia, which was officially presented at Alfa Teatro of Torino on Novembre 9, 2007.  After visiting the Museum of Modern Art in New York in 2010, Lidia was inspired to create installations similar to Yoko Ono’s Wish Tree, but hanging not only wishes, but poems and original works of art on cards on the trees.  Lidia Chiarelli’s “Poetry&Art Trees” thus began to appear in different exhibitions in Piedmont and abroad. Lidia’s passion for creative writing has motivated her to write poetry, and she became an award-winning poet in 2011, 2012 and 2014 : Premio Il Meleto di Guido Gozzano, Agliè 2011 (Segnalazione di Merito) and 2012 (Terzo Premio poesia inedita), Premio Wine in Literature, CE.PAM, Santo Stefano Belbo 2014. In June 2011 she was awarded a Certificate of Appreciation from The First International Poetry Festival of Swansea (U.K.) for her broadside poetry and art contribution. Her writing has been translated into English, French, Czech, Slovak (Prof. Miriam Margala) and Romanian (Dr. Olimpia Jacob) and published in Poetry Reviews and on web-sites in Italy, Great Britain, in the U.S.A. and in Romania. http://lidiachiarelli.jimdo.com/ http://www.saatchiart.com/LidiaChiarelli
http://www.edueda.net/index.php?title=Lidia_Chiarelli

Let’s go to Coney Island
today the gates are open for us
the hot August air
is laden with saltiness.
Let’s enter and forget
just for an hour
the problems and troubles of life.

A windmill
of sounds and fluorescent colours
attracts us
intoxicating magnet.

We go.
The Wonder Wheel
will take us high and higher
our eyes will caress the city
and will get lost into the blue of the ocean

We see
the carousel horses
moving in a tireless dance.

We smell
the sweet aroma of cotton candy
slowly spreading in the air.

A magic realm is waiting
to take us far
through time and space:

Today let’s go to Coney Island
and just for an hour
we will be children again. 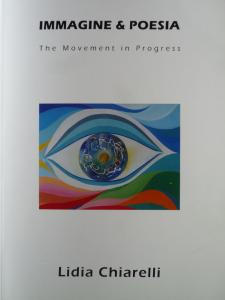